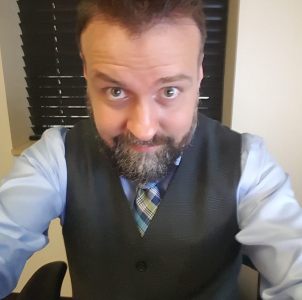 Thoughts Of A Platypus is the personal blog of Joshua Burkett

His most successful publication to date is The Gossip Weekly, a parody gossip column about all the kids at church (Josh wrote it in 4th grade).  He got in a lot of trouble, especially when the publication somehow made its way to the father of girl who broke his heart.  (He didn’t say that mean of things!)

His most successful business venture was in 6th grade when he got his first CD player for Christmas.  He founded Music Xerox International, a company that specialized in recording CDs onto high quality cassette tapes.  Not understanding how audio fidelity works, he figured that he could make a fortune selling CD quality tapes to kids at school who didn’t own CD players.  After his parents explained how that was illegal on multiple levels – including copyright infringement in the business name – Josh stepped down as the CEO of MXI.  The company only survived for two weeks and he only made one sale.  Plus, his music library at the time only consisted of Boys II Men and Amy Grant.

After graduating with his master’s in theology, Josh started taking his good ideas a bit more seriously.  He occasionally writes an opinion article for thelatest.com.  He’s also the co-host/bumbling sidekick of the Ken Bone Show, a weekly podcast featuring the red sweater-wearing viral sensation from the 2016 election.  He also considers this blog to be one of his good ideas, but he’ll let you be the judge of that.

He’s currently seeking representation on his debut novel: A Ceiling Full of Stars.  It’s his biggest good idea thus far.  It’s a pretty good book; it has dragons and stuff in it.  His mom likes it, and so does his wife.  But they might be a tad biased.

When Joshua isn’t writing, he can be most likely be found hanging out with his wife, two sons, and overweight Australian cattle dog.  He and his wife Amy enjoy doing cool Jesus-y stuff together, and they’re currently in the process of getting their foster care license.

If you like his stuff, feel free to drop him a line – even if it’s just to say hello.  He’s a friendly guy and likes to make new friends.  Plus, he’s got like 7 followers, so his inbox isn’t all that full.